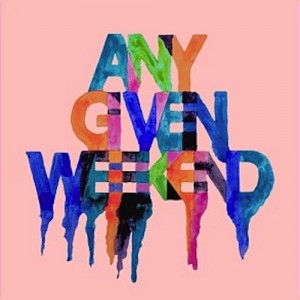 The debut album release of Northeast Party House, Any Given Weekend, is a young, powerful statement through strong beats and an underground party vibe.

Northeast Party House have always had a difficult style to pin down; they shuffle between danceable beats, jamming bass hits and hard vocals. But who cares about trying to label it when they’ve produced such a unique, consistent style?

The opening track “The Haunted” has gotten a bit of attention and it’s not hard to see why – it’s an addictive dance tune with repetitive, strong lyrics.

There are a lot of angsty kind of tracks on the album.  “Youth Allowance” is fun but perhaps not completely appropriate after the recently announced 2014 Budget! It makes you want to boycott society and dance up a storm in protest. “Fake Friends” has a drunken feel and a bunch of striking layers.

“In The Water” is a highlight, and probably one of the easiest tracks to listen to on this album. For those unacquainted with Northeast Party House’s style it’s a nice introduction.

Catch Northeast Party House on their national tour at the newly renovated Newtown Social Club on the 28th June or at The Lair on the 29th June.