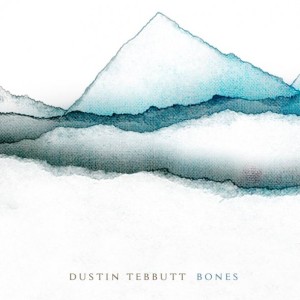 With winter so quickly descending upon us, it only seems appropriate that Dustin Tebbutt release his chilling second EP Bones.

Tebbutt’s two year sojourn in Sweden writing and recording music has already had a large influence on his first EP, Breach, but traces of this trip still seem to have left marks on his work in this record. The glacial album artwork and references to ‘frozen bones’ and ‘wild heart’ point to European winters and experiences of a new place.

But despite these associations with the cold, Dustin Tebbutt’s mellow guitar and whispering voice will warm you to the core. The track “Bones” has been carefully thought out and is a significant listen in this EP.

“Honest Hands” breathes a further delicacy than the other tracks. It’s like you can feel each stroke of the guitar strings, and Dustin’s voice exhibits a gentle emotional depth with each phrase.

Citing influences such as Sigur Rós and Justin Vernon, Dustin Tebbutt has created a beautiful work with Bones through his tender sound.

Catch Dustin Tebbutt on his intimate Australia wide tour – you can still find tickets to his Brisbane show at the Alhambra Lounge here.