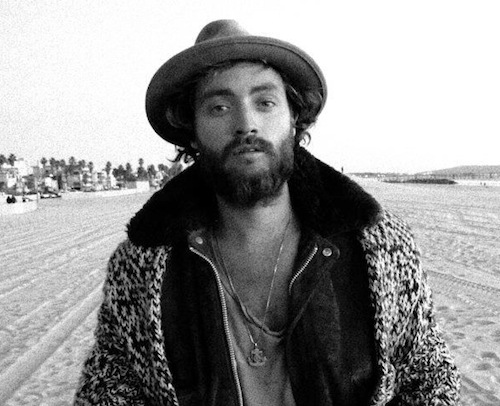 Heading down the dimly lit stairs of the Oxford Art Factory on Tuesday night, I had no idea at all what to expect from the night ahead. The crowd consisted of a mixture of Sydney’s finest hipsters and music gurus and the atmosphere was calm, collected and slightly electric. 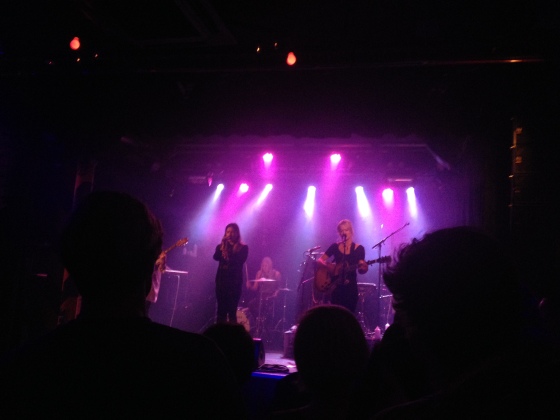 The night began with support act Little May showing off their incredible vocal, instrumental and lyrical abilities, every song captured my attention and kept the audience enticed. The harmonising of the vocalists was a sure highlight, and of course who doesn’t love a bit of girl power. 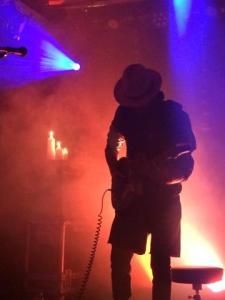 As the curtains closed to prepare for the main act, the room begin to fill up and the smell of incense took over, creating a chilled out atmosphere. As RY X has only properly released four tracks, there was really no certainty as to what sort of show he would put on, but as soon as the curtains opened, with the haunting display of candles and incredible back lighting, I knew I was in for a treat.

As Ry emerged onto the stage, looking like a beautifully mismatched scarecrow, the music slowly began and his raw yet powerful voice took over. With the slow beats of the drum thumping across the room, the music really did take control in a rather mesmerising manner. Throughout the show he spoke about the artistic approach he takes with his music and the importance of allowing for simple sounds to grow and create magnificent works, and the importance of this truly came across in his performance. In addition to this, his obvious pleasure at being back in Australia was evident, with him saying “thank you for coming” at every opportunity, only making the crowd love him more. Highlights came from his performances of ‘Berlin’ and ‘Shortline’ with their calming qualities and emotive abilities. 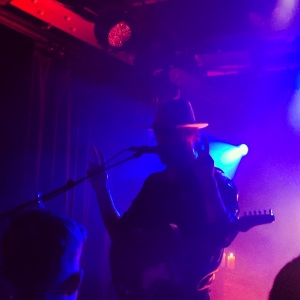 Although RY X has already left Australian turf, and who knows when he will be back, his musical presence is most definitely growing in the industry and he truly is one to keep an eye on over the next few years.

Check out his track ‘Berlin’ to get a taste: 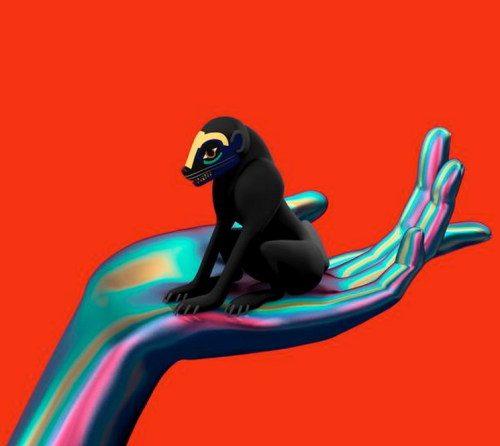 This exciting new track from SBTRKT will have you hooked the minute you start listening. Personally, I have been listening to it on repeat since its release earlier this week, and with a full album coming out in September, I know I’m excited to hear more.

SBTRKT have a history of releasing top notch remixes and original tunes that stretch the limits of sound and rhythm. With the inclusion of Ezra Koenig’s (from Vampire Weekend) vocals, this track really hits the ball out of the park and truly deserves the title of song of the week this week. 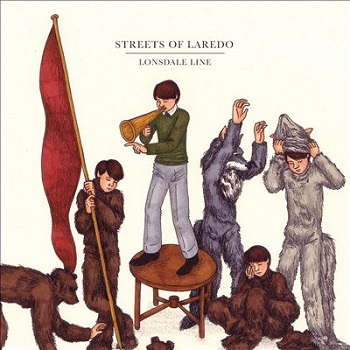 Streets of Laredo are the friends you want to accompany you on an adventure road tripping across the countryside. A New Zealand folk group based in Brooklyn, NY, these talented young people provide a candid glimpse into life in New York through their Lonsdale Line EP.

With a traveling band spirit similar to The Lumineers and Alabama Shakes, Streets of Laredo nail their mix of jangling instruments in “Lonsdale Line” and “Girlfriend”. Strong melodies make the tunes upbeat, both describing a form of escape from the drudgery of paying rent and trying to survive as a young person. In particular “Lonsdale Line” creates rather strong imagery of the American landscape, explored further in the rather beautiful music video directed and animated by Chris Tucci & Steven Mertens:

The EP then takes a slower, more pensive turn with the tracks “I’m Living (Bedroom Demo)” and “Need A Little Help (Bedroom Demo)”, continuing to lightly contemplate the existence of young people with a sadder tone.

This is a short and sweet record that gives a nice little taster into the potential of Streets of Laredo. And if you’re anything like us, dreaming of the energetic streets of New York, you can transport yourself there right now with their music video for ‘Girlfriend’. 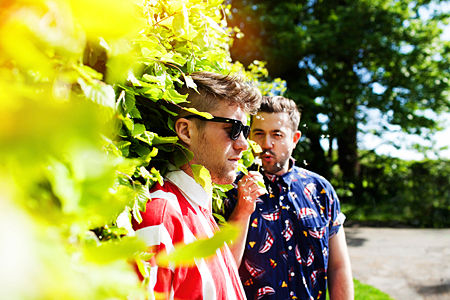 Thumpers might seem like a strange name for a band, but it won’t after experiencing the syncopated, pounding rhythms they bring to their live shows. And this well-managed sound was certainly a pleasant surprise for the casual audience that made it down to Newtown Social Club on Thursday.

As the crowd gently trickled in, Billy Fox filled the room with swirling electronic notes that brought to mind San Francisco producer Tycho, combined with snappier vocals to lift the mood. His offbeat sense of humour matched a quirky sense of style, and managed to lighten up the quiet audience.

Tales in Space started to draw a larger audience with an intriguingly in-sync rhythm guitar section and bass line that made them seem almost like a parody band. But these guys meant business, pulling out all the stops with nicely placed indie rock harmonies and even a cosmic cover of George Michael’s sultry “Careless Whisper” (a riff like that sax line never goes astray, I can tell you).

UK act Thumpers followed and showed the audience just how much fun they could have, with great chemistry on stage between friends. In fact, there was so much going on that it made me stop and realise just how much it’s easy to miss in a recording. From getting the audience in on the action by clapping, to a complex patchwork of syncopated vocal rhythms, there was a lot being put into their sound and none of it was lost on stage. “Tame” was a standout track in this respect, creating an interesting weave of beats. 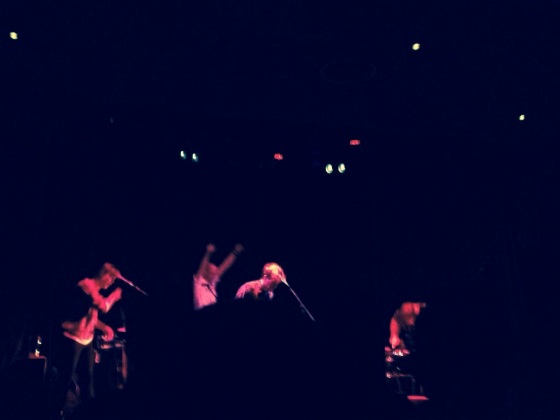 “We’re used to having an eleven-piece ensemble on stage, but we couldn’t afford to fly them all out,” apologised lead vocalist Marcus Pepperell. But Newtown Social Club proved once again to be a space that facilitates effective mixing of the sound, allowing each member of the band to shine, and bringing out the particularly lovely backup vocals just enough. The final track “Unkinder (A Tougher Love)” got people moving and encouraged some (ahem, braver) members of the audience to dance like no one was watching.

Thumpers gave a spirited performance to a relaxed audience and revealed their rhythmic prowess. Check out their debut album Galore, out now. 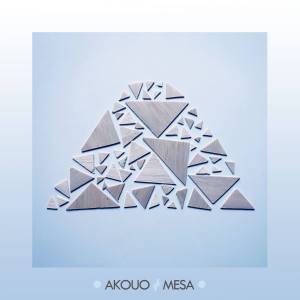 After seeing Ryan Farrington AKA Akouo support SAFIA on their single tour, he demonstrated to the audience pretty quickly that he’s one to keep a close eye on. Transforming dance floors with his heavy beats, and more importantly, his electrifying energy, one listen to this EP will give you only a snapshot of his talent.

“Last Time” is a perfect example of Akouo’s ability to drop a beat. Listen, and just try not to bounce. Alternatively, if you want to ease into his beat-heavy style of producing, take a look at what he’s done with Flume/George Maple’s “Bring You Down”:

“Not Enough” follows on from this strong start, leading with important vocals but dropping back to bring fluctuating rhythms forward. “Passing Through” and “Seas Roll On” are more restrained tracks, exploring simpler themes and repeating vocal lines.

There is a lot of variety on this EP which can be easy to overlook, exhibiting a number of influences from indie music to soul pop and hip hop.

A solid release from Akouo, but if you want to truly experience his music, catch one of his live shows. Word on the street is that he’ll soon be moving to mainland Australia so there should be many more of those!

Vinyl Garden
Create a free website or blog at WordPress.com.